When you bake bread, there are some essential ingredients. Yeast, for example, as well as flour and water. You can’t make the bread without these. Depending on what type of bread you are making, you might add raisins, eggs, or cheese. But these are non-essentials.

Life is a little like bread. You need six ingredients: carbon, nitrogen, hydrogen, oxygen, sulfur, and phosphorus. Or so scientists thought. 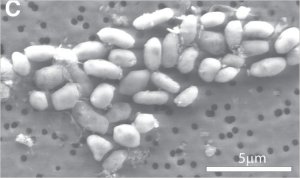 According to a recently published paper, the bacteria pictured here was able to survive when fed arsenic rather than phosphorus.

This week, researchers announced that they had discovered a bacteria at the bottom of a lake in California that was able to grow in arsenic instead of phosphorus. This might not sound like a big deal, but it calls into question basic assumptions about the nature of life, and its requirements. It also opens the door for an understanding of life that could exist in a different way — possibly on a different planet where different elements and nutrients are available.

Phosphorus was thought to be more or less irreplaceable because it forms the backbone of DNA. It is also a key player in a molecule called adenosine triphosphate (commonly abbreviated as ATP), which is the molecule the body uses for energy — and therefore survival. Arsenic, on the other hand, while very similar to phosphorus in its chemical properties, is toxic to many animals.

But according to these researchers, this strain of bacteria — when “fed” arsenic instead of the phosphorus that it normally would use — was able to survive, and actually incorporate the arsenic into the positions that phosphorus would normally occupy.

We’ll see if other investigation bears these results out. But if they do — what a beautiful example of adaptability of an organism, and of science pushing the limits of what we know so that we can gain a better understanding of our world, and of ourselves.

One Comment to “Life’s essential ingredients called into question”