The amazing nature of … nature

A “nerd,” by my definition, is someone who gets really excited about very obscure and detailed things.

I’m a nerd. I know it. And I’m proud of it. (Those of you who know me personally are, by this time, shaking your head in agreement. I’m sure of it. Go ahead, it’s OK. I understand.)

What do I get excited about? These days, it’s often biology lectures and readings. Yes, I find my biology textbook exciting (sometimes). But obviously, it’s not the textbook itself that excites me; it is the content. The amazing nature of … nature.

Here are some things that I’ve learned, things I think just about everyone will find pretty amazing.

1) I was going to save this fact (my favorite) for last, but I can’t help myself. It’s too incredible to leave for the bottom:

The total length of an average adult’s blood vessels (arteries + veins + capillaries) is equal to twice the circumference of the Earth at the equator.

That just sounds huge … and it is … approximately 50,000 miles! Incredible indeed.

But why is this significant? Because this is how all of the tissues — and all of the body’s cells — get access to nutrients and oxygen, as well as dispose of their waste products (especially carbon dioxide). In creatures with one cell or just a few cells, all of those cells can be exposed to the environment. So oxygen, for example, can diffuse into all of the animal’s cells from the outside. But diffusion — the process of basically “spreading out” to an even concentration — only works over short distances. VERY short distances. It won’t work over many cells. So as multi-cellular animals evolved, they evolved circulatory systems with blood vessels that carry nutrients and oxygen (and remove waste) to and from all of the cells.

The veins and arteries in animals aren’t responsible for much of that transfer of substances; most of that happens in the capillaries — tiny vessels made up of a layer of what are called “simple squamous epithelial” cells, which are thin and ideal for allowing things to spread across them. We need so many miles of these vessels because we have so many cells, and they all need access to oxygen, nutrients, and a waste disposal system. Without this circulatory system, we would cease to exist because our cells would not receive oxygen, and oxygen is required for our cells to turn the food we eat into energy that the body can use to do work. It all goes hand in hand. See, I told you it was amazing!

2) Everyone knows that when we exhale, we get rid of carbon dioxide. But why? Here is the reason:

Maintaining a constant level of carbon dioxide — not too high, not too low — is essential for keeping the body’s pH at the proper level.

OK, don’t let me lose you here. Quick chemistry lesson: pH is a measure of the concentration of hydrogen ions in a solution. In more familiar terms: a measure of whether something is acidic or basic. A solution’s pH is measured using a mathematical logarithm, so this relationship might seem backwards, but trust me on this … the more hydrogen ions, the lower the pH (this signifies an acidic solution). The fewer hydrogen ions, the higher the pH (this signifies a basic solution). A “neutral” solution has a pH of 7. Human blood has a pH of about 7.4 — just a tad basic. Change the blood’s pH and you’ve got BIG, BIG problems. Because a lot of the substances in the blood (especially a class of proteins called enzymes, which help facilitate all kinds of cellular reactions) only function at a certain pH range.

So back to carbon dioxide. Carbon dioxide can dissolve in the body, reacting with water to form carbonic acid. Carbonic acid is very unstable, and it “deionizes” — breaks down into its component parts of hydrogen ions and bicarbonate ions.

It’s a matter of precise regulation, a biochemical masterpiece.

3) In the last fact about carbon dioxide, I briefly mentioned proteins. Let me say this first: I LOVE PROTEINS. And I’m not talking about steak or pork chops. (Although I love those too.) I find proteins immensely fascinating. Their structure, their functions, what happens when you lose a particular protein function … everything. I have a whole “protein” blog post percolating in my head. But I will save that for later.

Here, I want to talk about high fevers, and why those are so dangerous. I’m not talking about a fever of 99 or 100 degrees. That’s not a big deal. It’s not fun, but it’s not dangerous. I’m not doctor, though, so don’t take my word for it. But according to the world-renowned Cleveland Clinic, a fever above 102 degrees F is “cause for concern,” and a fever above 105 degrees F is a “life-threatening emergency” and should precipitate a call to 9-1-1.

But why? It has to do (in part) with the nature — and denaturing — of proteins. In essence:

A very high fever causes the proteins (especially the enzymes) in the body to denture — lose their structure.

Let me explain. Proteins are a class of “macromolecule” (“giant” molecule) in the body. Each protein is made up of smaller units called amino acids that are chemically bonded together. Those amino acids each have particular chemical behaviors so that when the protein is put together, the amino acids interact to form a special three-dimensional structure. Think about two simple analogies and you will understand these interactions (on a basic level). Consider a magnet: opposite ends (positive and negative) attract, while same ends (positive/positive or negative/negative) repel. Same goes for the amino acids that are “charged” as either positive or negative. Then consider oil and water. Oily things mix together. Water-based things mix together. But oil-based and water-based things do NOT mix together. It is this way for amino acids with hydrophobic (“water-hating”) properties and those with hydrophilic (“water-loving”) properties. Put a string of amino acids together, each acid having one of these properties, and you will get a shape of some sort as there are chemical attractions and repulsions. That three-dimensional shape is very important for a protein’s function. Change a protein’s shape, and it can (often) no longer do its job. Or at the least, no longer do its job as well.

Back to fevers: how do these affect proteins? Well, temperature affects the chemical attractions and repulsions that the amino acids have with each other. If you raise the temperature of a protein’s environment too much, its structure falls apart. Which means it can no longer do its job. Which is why a high fever can be fatal — proteins, and a specific type of protein called an enzyme, are necessary for human life. They basically keep the body’s machinery operating full time. Without them, we just stop working. And being. Not good.

See, I told you proteins are cool …

4) OK, time to switch gears a bit here. I’ve been focusing, so far, on humans and human anatomy / physiology. But the rest of the animal kingdom is pretty nifty too. And there is a helluva great deal of diversity out there in terms of form, function, structure, etc. First on my list are ectotherms. More commonly (and incorrectly) known as “cold-blooded” animals. The proper definition of an ectotherm, in essence, is an animal that gains its heat from external sources. An example would be a lizard or a snake. An endotherm, on the other hand, produces its own body heat. An example of an endotherm is dog, cat, etc. (Humans are also endotherms.)

At first glance, you might think that ectotherms got the short end of the stick while endotherms have the more advantageous system, in all respects. Endotherms don’t need to rely on the sun or other environmental factors for body heat. And this is true. Endotherms stay plenty warm even in Arctic environments, where an ectotherm would freeze to death in an instant. That said, endotherms don’t have it all made. Think about it: How do you produce heat? You have to expend energy. So endotherms have to USE energy to produce their own body heat. Ectotherms, on the other hand, can use their energy for other things. And then they don’t have to eat so much. Meaning they don’t have to spend so much time looking for food. For humans who have access to Jewel, Dominick’s, Albertson’s, or Super Target, that’s not a big deal. But if you’re an animal that has to hunt for every morsel, having to eat less food is huge.

But how much less energy does an ectotherm consume, compared to an endotherm? We shall use an American alligator and a human (of a similar size) as comparisons. Take a wild guess here. What fraction of a human’s energy do you think the alligator consumes, at rest? One-half? One-fourth? One-tenth? Not even close. One-twentieth. Yes, you read right:

An American alligator, at rest, consumes one-twentieth the energy of a comparably-sized human.

That said, relying on the environment for warmth (and cooling) has its drawbacks. If it’s cold but cloudy, staying warm becomes more of a challenge. Endotherms have an easier time with thermoregulation — keeping their bodies at a constant temperature — because they produce their own body heat. And thermoregulation is important because of my favorite macromolecules again … PROTEINS! The specific kinds of proteins called enzymes, the ones the facilitate chemical reactions, are very sensitive to temperature as I mentioned before — both temperatures that are too high and temperatures that are too low. According to my biology textbook, for every 10 degree C (18 degree F) decrease in body temperature, the rate of those reactions that are helped out by enzymes decrease two- to three-fold. That’s the body starting to shut down. So for an animal (including a human) to keep its body within an optimal temperature range is key to survival.

5) Now on to insects. Which, thankfully, tend to be the size of peas, for the most part. But why?

Insects are restricted in size because they have relatively inefficient respiratory systems.

When we think of respiratory systems, we usually think of the lungs or of gills. But insects have a different system called a tracheal system. Here is a picture of what the system looks like, using a grasshopper as an example: 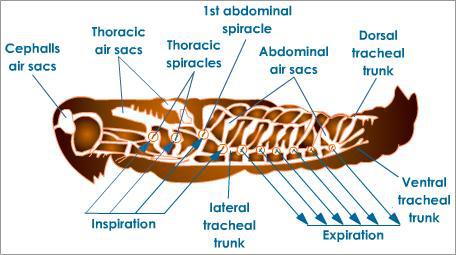 Insects like this grasshopper have tubes that open up to the environment. Air (and oxygen) passively diffuse in from the outside and spread into smaller branched tubes, which bring the air into contact with most of the insect’s body cells. Larger insects increase the efficiency of this system by using rhythmic body movements to compress and expand their air tubes to help spread the air through their bodies. Even so, this is a relatively inefficient system, compared with that of the lungs. The reason is that diffusion — the spreading out of a substance to an even concentration — only really works well across a short distance. In a small insect, this diffusion process works fine. But larger animals, from squirrels to humans, require a more “active” respiratory system. So no worries, you won’t see a cockroach the size of a minivan any time soon. Phew.