The city speaks, if you listen 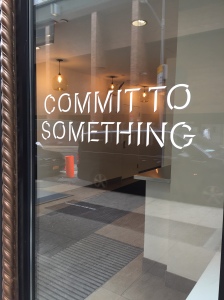 Stopping to snap a photo while heading down a busy NYC sidewalk is a very touristy thing to do. I live here, but I do it too, when what I’ve seen seems important to capture, as this window decal did. Its message — to commit; to eschew indecision — is a good reminder.

Tourists in New York City are pretty obvious. One way they often stand out is that they stop in the middle of the sidewalk (blocking the rush of pedestrian traffic) to take pictures of things that those of us who live in New York City find commonplace.

I live here. I’m no tourist. But I still find myself frequently staring in wonder as I make my way through the city. And I, too, want to record those moments of wonder. What sets me aside from so many tourists is that I do my best to step out of the pedestrian traffic, making my photo-op as unobtrusive as possible.

I probably still look like a tourist. And I’m ok with that. The moment I stop approaching my surroundings with awe, and a desire to share that awe, is the moment that I’ve lost the childhood curiosity that I both nurtured and sharpened as a journalist. The same curiosity that prompts me to ask a patient careful questions to probe her story and uncover the root of her malady.

In this post I’ve included several city photos I took recently, several signs whose messages spoke to me. Whose messages I thought might speak to some of you, too.

The photo at the top right of this blog post is from a high-rise building I passed; I don’t remember quite where. The photos below were taken on different occasions in front of Pure Barre, a fitness studio on 2nd Avenue that I pass frequently (and whose signs I’ve written about before).

One Comment to “The city speaks, if you listen”