The importance of cultural exchange — and of cows

You are no longer a woman. You are a bushwoman. 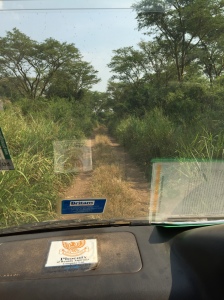 Driving into the Ugandan bush during my safari. During a safari, you spend hours in the car, going from one animal sighting spot to another. I had a wonderful guide, so the time on the road — and our many conversations — became part of the whole experience.

That’s what my guide, Joseph, jokingly told me as we drove into the African bush on the first day of my safari. I didn’t know it at the time, but during those four days, I would learn so much about Uganda — and he about the United States.

It started shortly after Joseph and I hit the road. At one point, he and some boda-boda (motorcycle taxi) drivers were joking in Luganda, the local language. One thing I really appreciated about Joseph was that he would translate these conversations for me. So he promptly told me that I had been the subject of that conversation.

“That’s a beautiful woman you have,” one of the drivers had laughingly said to Joseph. “How many cows do you want for her?”

This launched us into a discussion about marriage customs in Uganda, customs that to me as an independent America woman were hard to wrap my head around. Apparently, the bridegroom often gives a gift to the bride’s family — in the form of cows, if you’re from a certain part of the country. Joseph emphasized that culturally, this is not seen as actually paying for the bride. It’s more a gift of appreciation. But before that happens, the man has to have an “introduction” — kind of like an engagement party, where the future groom buys the whole village a bunch of food both to celebrate and to prove that he’s a good guy. This introduction, Joseph said, is actually more important than the wedding itself. Then to get engaged in the church, you need a letter from the parents, granting approval. So for a man, between the introduction and the dowry, getting married can be an expensive proposition.

I continued to learn about Uganda throughout the trip, things you might not read about in guidebooks. As we drove through one particular town for example, Joseph commented that HIV was an especially big problem there. It’s a stopover place for truckers coming from both Kenya and Tanzania, he said — and some of the truckers look to hire prostitutes during their time there.

Our conversations, though, were well balanced between heavy and light topics. Toward the end of the trip, I asked Joseph about the hand motions I’d seen him make time and time again out his driver’s side window. He explained that it was a sort of sign language oncoming drivers used to query about road conditions up ahead. The oncoming driver would blink his lights. There were three possible responses, Joseph told me. If things are fine, you stick your hand out the window, palm parallel to the road, and wave your hand left to right and back again. If there is a problem immediately up ahead for the oncoming driver, with your hand out the window and your index finger pointed down to the road, you move your hand up and down. If things are bad — but not for some distance — you make a sine-wave motion with your hand. And then after the wave motion, you point your index finger down toward the road several times. I told Joseph I fully support adopting this system in the United States. 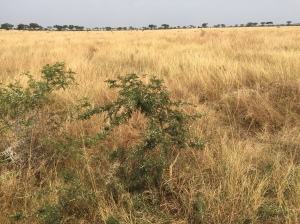 Another view from the road, this time of a grassland savannah.

During our many hours in the car, I made a number of important contributions to Joseph’s understanding of America and Americans too. I did my best to explain some of our inexplicable vernacular expressions, including the old-fashioned phrase “knock on wood.” He understandably thought that was silly. I don’t blame him.

Perhaps the most significant knowledge I imparted relates to my hometown, Chicago. I told Joseph that I live in New York City now, but that previously I was in Chicago. When he heard that, this was his first question: “Do they raise cows there?” You can imagine my confusion. I quickly realized, though, that Joseph’s question made total sense when you think about one of Chicago’s favorite sons, Michael Jordan of the Chicago Bulls. Why would they use “bulls” for the team’s mascot if they don’t have cows in Chicago? Joseph wondered. Good question. I still don’t have a good answer.

There was plenty that surprised me about Uganda, and Joseph about the United States. Some of it was confusing, and some of it was beautiful. But learning about another culture, the differences and similarities, regardless of whether they make sense or not — that’s part of why I travel. I’m so grateful that my guide, Joseph, felt the same way. It made for a wonderful four-day trip.