The hospital stay in rural Uganda

When I had my tonsils out in 2014, I spent a couple days in the hospital after minor complications with the surgery. It was by no means a vacation. But I certainly felt well cared for. I expected it. And I took for granted the clean sheets, three daily meals, and constant (amazing!) nursing care. My time in Uganda taught me that my hospital experience is not necessarily the norm, and I shouldn’t take it for granted. These pictures are from Naggalama Hospital, but I also spent a day at Mulago, the government hospital in Kampala. The same principles applied there, from what I could tell.

Attendants must wash patients’ clothes and bed linens behind the hospital.

Three things that are expected in an American hospital — clean bedding, three daily meals, and constant nursing care — aren’t part of the hospital stay at Naggalama. As a hospital patient, you are required to bring an “attendant” to care for you. This person is usually a family member. He or she washes your clothes and bed linens (there is a washing station behind the hospital). The hospital doesn’t provide bed linens or gowns; you have to bring these in yourself. The attendant also either cooks or brings in your food (there is a place to cook behind the hospital, as well as a small restaurant called St. Peter’s). There are nurses, but few of them, and they serve many patients. Nurses administer IV medications, but attendants hand out the oral drugs, after receiving instructions from the nurse. 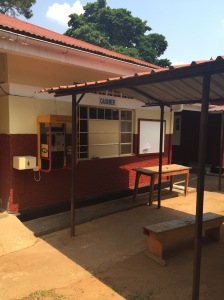 Attendants pay in advance for medical services with the cashier.

The attendants also play a major role in the patients getting proper medical services. If a patient needs a blood test, the attendant must take the doctor’s order to the cashier, pay for the blood test in advance, and then bring the receipt back to the ward so the nurse can draw the blood. Some medications must also be paid for in advance. The bulk of the hospital bill, though, is settled upon discharge. The patient can’t leave, however, until the bill has been paid. Supplies are precious and expensive, so the bills are incredibly detailed, down to every pair of latex gloves used in the patient’s care.

Having been both a hospital patient and a hospital employee (and now a trainee), I have a certain picture of what a hospital room looks like. At Naggalama, the majority of adult patients are not in rooms. They are in the male or female wards. There are a handful of private rooms, but these are very expensive, by Ugandan standards. The wards are made up of units (my own term). Each unit has two rows of three or four beds facing each other. The units are separated by walls that go about halfway from the floor to the ceiling, so you can see across the ward. Above each bed is a knotted mosquito net, pulled down at night to protect the patient from malaria-carrying bugs. Next to the beds you will find colored straw mats where the attendants sit during the day, and where they sleep at night.

Here is a brief, visual tour through the adult ward, and several other parts of the hospital. (Click on any image to enlarge and begin a mini slideshow.) 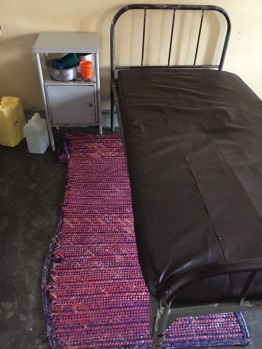 The colored mat of an attendant under a bed in the adult ward. 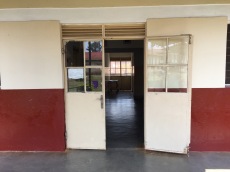 Looking into the adult ward.

The waiting area of the OPD (outpatient department). 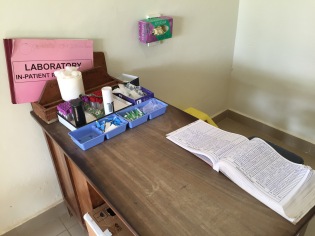 Entrance to the hospital laboratory. 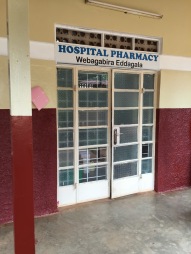 Entrance to the hospital pharmacy.

Interior of the hospital pharmacy.

Pills are dispensed in these paper bags.

Staff housing on the hospital campus: 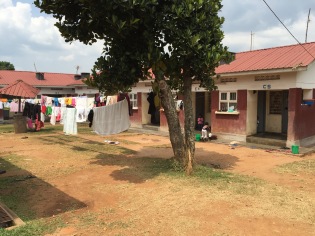 Surgical gowns drying outside after being washed:

3 Comments to “The hospital stay in rural Uganda”