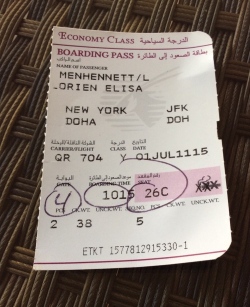 It’s been years since I’ve taken a major international trip. And even longer since flying to a hub like Doha, Qatar, where I switch planes to Entebbe, Uganda. Even before taking off from New York’s JFK airport, my experience was already an international one. Living in NYC, I’m used to distinct people wearing distinct clothing. But the crowd taking my flight is of all colors — literally. There’s the man wearing a brown-and-blue plaid suit and a black fedora, and women in flowing headscarves, gold, pink, jet black. Then lots of people like me, wearing T-shirts, jackets, and casual pants — trying to be comfortable for this 12-hour flight. Standing in line on the jetway, waiting to board, I yawned. I’d gone to bed too late and gotten up too early. “Tired?” The white-haired, lanky, black man in front of me asked. “Yes,” I said, smiling. We started talking — he’s from the Chicago area, Wheaton to be precise. The same suburb where my best friend from childhood lived so many years ago. He’s headed to Sudan to visit his parents. “I’ve never been to Uganda,” he told me when I mentioned my own destination. “But I’d like to go.” There’s been lots of rain in Africa lately, he added — cools things off. Good to know.

Seated next to me on the flight was a brown-haired, petite nurse, on her way to the Philippines to visit her college-age daughter. She works in a plastic surgery practice in Manhattan. We talked about medicine, how it’s nurses who really take care of patients, how some wealthy people are nice and others are bit**** (just like normal people, I told her), how her daughter wants to go to medical school someday.

Most people, though, aren’t much for conversation — they’re either tuned out or plugged in. There are more movies available on this flight than I’ve ever seen, in languages from English to Spanish to German to French to Portuguese to languages in cryptic, non-Latin characters I can’t make out. A slice of the world is up here at 30,000 feet with me.