Health In The Headlines: Telemedicine 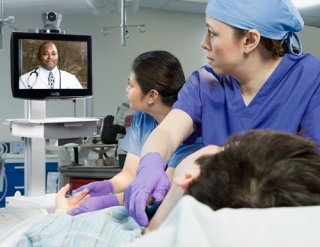 Is this – telemedicine – the future of health care? “Visits” with the doctor via video conferencing?
No, I don’t think so. We all have plenty of in-person appointments with our doctors to look forward to, so not to worry. But I do think telemedicine may be part of the future of health care. And for some people, it already is. People like Deanna Ventura, who live too far away from the medical specialists they need. Ventura, who has Parkinson’s, was recently featured in a story about telemedicine on National Public Radio (click here for the online version of the story). She has been seeing a movement disorders specialist at Johns Hopkins – 343 miles from her house in upstate New York – for the last four years via video conference calls, according to the NPR story. From my impression, she seemed very happy with the arrangement.
That NPR story piqued my interest, so I decided to do a little digging into the issue myself. Here is some of what I found – and what I think about it.
First of all, what exactly is telemedicine? How is it defined? According to a report by the Institute of Medicine (Telemedicine: A Guide To Assessing Telecommunications For Health Care), telemedicine is:
“… the use of electronic information and communications technologies to provide and support health care when distance separates the participants” (44).
But what does that mean? This definition includes video conferences, sure, but also telephone calls, e-mail messages, the sending/receiving of still images (such as X-rays), and the computer-based processing of other medically related data. This committee’s definition also includes consultation, administrative, and educational uses of telecommunications (but I won’t really go in that direction).
And in reality, a lot of what falls under this definition is already going on in health care today. We have all talked with our doctors on the phone; some of us may have exchanged e-mails with physicians as well. And if you have a test done at one facility, your doctor (who is at another facility) often gets the results or images electronically – that is all telemedicine, technically.
The use of video, though, is what tends to get people’s attention. That seems like something new. But while it may be new to most of us, it’s actually not a novel idea. According to one article I read,* the first use of telemedicine in this context took place in 1959, in the form of a two-way, closed-circuit microwave television system used between the Nebraska Psychiatric Institute and Norfolk State Hospital (also in Nebraska).
Since then, though, telemedicine hasn’t exactly caught on. There are several reasons for this. One reason is licensing. Doctors are licensed in the state in which they practice, which makes them unable to practice across state lines, thus limiting telemedicine’s reach. The Institute of Medicine report referenced the possibility of creating a national telemedicine license. But that is a long ways off, if indeed it ever comes into being. Another reason is that health insurance companies usually will not cover telemedicine “visits.” So people are either left to pay for them out of pocket, or, in the case of Deanna Ventura (of the NPR story), rely on external fundraising to foot the bill. In addition, there has been little evaluation of telemedicine, in terms of quality of care or cost. This, according to the Institute of Medicine report, leaves people leery of adopting the technology. And finally, there is the issue of technology itself. As we all know, technology changes almost daily. Finding the appropriate, compatible technologies to use for telemedicine is incredibly difficult, especially when you must take patient privacy and confidentiality into account.
That said, medical practitioners are finding interesting, novel ways to use existing (and commonplace) technology. Millions of people across the globe use the iPhone (including myself). One article** I found on PubMed described how physicians used the iPhone 4 FaceTime software to videochat with each other and share images of a patient’s foot that had a limb-threatening infection, and needed emergency surgery. Here is a section of the article explaining what was done:
“A patient with a limb-threatening infection was taken on an urgent basis to the operating room. With no prior planning except for text messaging, the surgeon consulted with 2 surgical colleagues to discuss incision planning, requirements for resection, and subsequent surgical staging (Figs 2a–2d). The “FaceTime” application was managed by an operating room technician under the direction of the operating surgeon” (215).
And here are the images captured on the iPhone 4 (warning: these are a bit graphic).

If I had been that diabetic patient who needed emergency foot surgery, I would have been quite willing to have my surgeon consult with another surgeon via iPhone. If I were Deanna Ventura, didn’t drive, and lived too far to see the specialist I needed, I would be happy to see the physician over video conferencing. But if I could, I would still prefer to see a doctor in a face-to-face visit. That’s just me – I like the personal contact. There are times, though, when that’s just not possible. And that’s where telemedicine extends medicine’s reach.
*Breen, G., and Matusitz, J. (2010). An evolutionary examination of telemedicine: a health and computer-mediated communication perspective. Soc Work Public Health 25, 59-71.
**Armstrong, D.G., Giovinco, N., Mills, J.L., and Rogers, L.C. (2011). FaceTime for Physicians: Using Real Time Mobile Phone-Based Videoconferencing to Augment Diagnosis and Care in Telemedicine. Eplasty 11, e23-e23.