Getting better all the time 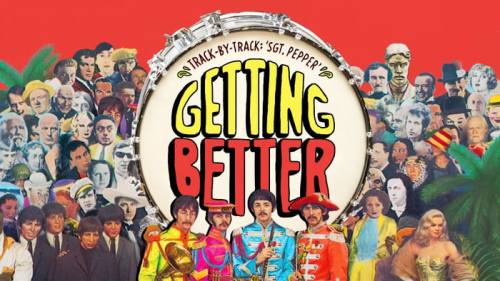 I hate that phrase. In fact, I wish they (I’m not sure who “they” is, though) would strike it from the annals of common English phrases.

As an eldest child, and a dyed-in-the-polyester (I prefer vintage to chic) perfectionist, I have been working, for the last several years, to deconstruct my desire for perfection. Because absolute perfection, as pictured in my perfectionist brain, is absolutely impossible. Striving for the impossible is pretty pointless. And, as I have discovered, exercises in futility are infinitely frustrating.

So, here is my replacement phrase:

Or, as the Beatles put it:

Getting better all the time …

And this morning, as I was discussing my recent work at the lab with my husband, Geoff, I realized something. I am practicing. I am improving. I am getting better all the time.

Here are a few of my observations:

When I first started at the lab, I had to start from scratch: learning to pipette. My hands were shaky with nervousness (and sometimes over-caffeination), and I often contaminated the tip of the pipette by touching what I wasn’t supposed to–the outside of a flask, the countertop, you name it. I just didn’t have the mentality of keeping things completely sterile. Of course, I would realize my mistake right after doing it, but by then it was too late and I had to discard the pipette (and what was in it) and tear open a new one. This wasted not only money and supples, but also time.

These days, I rarely contaminate the pipettes. I move more quickly from bottle of solution to test tube or flask. My hands are more steady. I have better aim when releasing liquid (again, less waste, more accuracy, and time saving). Olga even trusts me to “passage” the cells now–divide them from, say, four plates (dishes) into eight through a series of washes and “trypsinization” (which dissolves the cells’ hold on the plastic plates and allows them to be sucked up and released into new plates–a very delicate procedure). This process has to be done very quickly or the cells can be severely damaged, even destroyed. I’m fast enough–and accurate enough–to do this now.

These days, contrary to my first few weeks in the lab, Olga will give me an assignment and pretty much leave me to it. Of course, if I have questions or a problem, she is available to help, but she has the confidence–and the expectation–that I will remember the techniques, processes, and steps that I have learned and can (and will) repeat them succesfully and in the proper order.

Thankfully, Olga is an amazing teacher and explains things extremely well, so that by the time she expects me to do them on my own, I am more than prepared to do so.

The fact that I am more autonomous forces me to rely on myself more, and learn the techniques for myself, rather than rely on Olga to re-explain them every time. This dynamic also allows Olga and me to accomplish more because we can both be working on different things at the same time. Even though I work more slowly than Olga, slow work is better than no work. As she put it the other day, “If you hadn’t done this [set up a reaction], I wouldn’t have had time to do it at all.” That was the best compliment she could have given me.

Self-confidence has never been one of my strong points. Or so I thought.

When I was a reporter, I remember walking away from finishing the newspaper on deadline day thinking to myself, “Did I spell that commissioner’s name right?” or “Did I put the right date in for that park district event?” or “Did I write a caption for that photo of the dog park?” Heart pounding, sweating, a total nervous wreck as I walked the few blocks to my car, fighting the urge to turn back to check on whether I had done those things or not. I knew that I had, but I doubted myself anyway. I was sure I had forgotten something, so I mentally went through just about every possible mistake I could have made trying to find my error (or errors). With my lab work, I have very few such thoughts. And if one starts to creep in, I immediately squash it like the ugly, infectious cockroach that it is. I trust in my precision, my accuracy, my work ethic, my knowledge, my understanding, and my ability to follow directions. One thing that has really helped me is to develop a process for myself when I work on a task.

For example, if I am making multiple “master mixes” for a polymerase chain reaction (also called PCR–a process that creates a bunch of DNA from a very small sample), I create a checklist for the “ingredients,” along with the microliters needed of each. First, I will load the magnesium chlorite into each test tube, then put the MgCl off to the side so I know it has been added. Next I will load the “super clean water,” check it off, and put it off to the side, and so on. This way I don’t duplicate any ingredients, and I know when everything has been done (and in the proper amount). This, of course, also contributes to speed and efficiency–which never hurts. For times when those “cockroaches” scuttle up, I have, already prepared, a list of battle phrases (or cans of RAID, if you like) to use against them.

An example: “I acknowledge that I am concerned about whether I added the cDNA to the master mix, but I have checked it off on my list, and the tube has been put off to the side. So even though I don’t specifically remember adding it, I know that I did because I followed my process. As a result, there is no need to be worried about this.” Maybe it sounds hokey, but using these phrases, for the few times I have to deal with worrisome and negative thoughts, really makes a difference.

I have more self-confidence now to begin with, and when I struggle, I have another “tool” in my mental “toolbox” to help me.

On May 11, my first day at the lab, I understood … um … maybe 10 percent of what Olga was telling me. OK, perhaps a little more, but it was bits and pieces, not a comprehensive picture. So I spent a lot of time being really confused and doing things but not really understanding why.

Please note — this was not Olga’s fault; she explained (and continues to explain) things very well. I simply did not have the background, nor the scientific vocabulary, to comprehend even the most elementary of explanations.

Boy, how things have changed. And I especially noticed it this week. On Wednesday, Olga had me set up the PCR reaction (see explanation of PCR in observation No. 3). Before I started pipetting, she gave me the background on what exactly we were going to be looking for in the end (with the gel electrophoresis). I took very careful notes, both so I could set up the reaction properly and so I could remember the details of what I had done. The same buzz words came up as had come up before: transcription factors, differentiation markers, fetal organoids, endogenous control. This time, though, I actually knew what she meant. In fact, I knew enough to ask intelligent (and genuine–not pedantic) questions about what she was telling me! It was a true victory.

I’m not much of a hymn-singer, but I totally got what John Newton meant in “Amazing Grace,” though in a scientific, rather than religious, context: “I once was lost, but now am found / was blind but now I see.”

The second example of this “understanding” phenomenon came at yesterday’s (Thursday’s) weekly afternoon lab meeting. Each week, the usual procedure is that one of the lab’s scientists presents his or her recent work for discussion. This week however, we did something a little different. Lab Director Rich Minshall and one of the PhD candidates, Aaron, picked out a research paper for us to read and discuss.

When I read the title early Thursday morning, I groaned. My eyes glazed over, anticipatorially, sure that the paper was going to be a total drag (i.e., completely incomprehensible to me). It was indeed just the title that gave me this impression: “Transcellular migration of leukocytes is mediated by the endothelial lateral border recycling compartment.” *GROAN* indeed.

But I started reading anyway — that damn Puritan work ethic again. And to my surprise, I was understanding things. Sure, I had to reread parts, sometimes multiple times, and look up certain concepts on the Web, but I was getting it. In fact, I was getting into it — I even started highlighting the text onscreen (I’d never done that before; it was pretty cool) so I could remember and review the highlights and main conclusions / points of the paper before our 4 p.m. meeting.

I didn’t really understand the visuals that accompanied the paper, but that was OK. I understood the ideas. And at the lab meeting, I actually contributed — for the first time. Not on the level of the Phd’ers, but who would expect that? The fact remains, I contributed, because I was able to understand what was going on–something that had never happened before.

I felt kind of like a surfer who, for weeks, had been trying to catch a wave, only to be knocked down to the ocean floor. But one day, she manages to hold her balance, and hold the wave’s crest, and ride it through. Pretty cool.