While Olga is out of town, I’m “babysitting” her mouse lung cells, which look very much like the human ones pictured above.

“What are you doing?”

That was the question I kept waiting to be asked as I was in the lab on Monday. With Olga (my mentor/supervisor) around, I feel confident and secure. Like I belong there. But she is in New Orleans at a conference this whole week, so I’m on my own.

And not only am I on my own, I’ve been entrusted with the care of three flasks and one plate (kind of like a petri dish) of live mouse lung cells to care for. Basically, I’m a biochemical babysitter.

Olga trained me well last week for what I have to do – change the cells’ media, which is the liquidy stuff that they live in (think diaper changing and feeding). But I’d never done it without her watching over my shoulder, coaching me, encouraging me, making sure nothing went wrong.

I arrived at the lab around 3:45 p.m. Monday afternoon. My first task: go into the “cold storage room” – which is literally a giant walk-in freezer, the kind you see in restaurants or meat packing plants – and get the bright pink media that Olga had prepared last Friday. It was sitting in a styrofoam cooler full of ice to keep it preserved. Prying open the lid, I found that much of the ice preserving both Monday’s and Wednesday’s batches of media had melted, but that the media seemed to still be cold enough. Well, I hope so. For the cells’ sake, and for mine.

My second task: warm the media in a machine-controlled water bath (it’s a big box with a lift-up plastic lid and a layer of about 2 inches of water in the bottom), up to 37 degrees celsius, the temperature at which the cells live. Once the tube of media was in the water bath, I had to wait for about 20 minutes. (And as my husband will attest, I’m not so good at waiting.)

To kill time, I decided to look at the cells under the microscope. To my pleasant surprise, I got the thing to work, and was able to focus in on the cells perfectly. Each flask and plate looked quite good. Well, I think they looked good. Nothing seemed dead, at least. (See picture at left for an example of what lung cells look like. The picture is of human lung cells; however, Olga and I are working with mouse lung cells.)

A few minutes before the media was to be ready, I fired up the hood, which is a protective and sterile area where you perform experiments and procedures. Working under a hood is like working through a partly open window – you have 8 inches of clearance between the  top of the hood’s opening and the hood’s table top surface. And you have to reach in quite a ways, because the first few inches of the table top area aren’t sterile because that is where the air blows through. It’s a bit of a challenge. I rehearsed what Olga had taught me: turn on the blower, open up the screen (the window), and then switch from UV to flourescent light. OK. Ready to go.

So I pulled the two small flasks out of the warming unit – which looks like a mini frig, only  it keeps things warm rather than cold, and pumps 5 percent of carbon dioxide into the air inside to keep everything healthy and happy. I brought the flasks over to the hood, sprayed my gloves with a 70 percent solution of ethanol (to help with sterilization) and got down to business. 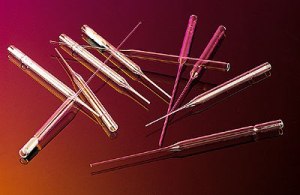 Then I took a regular 5 milliliter pipette (see the picture at right), which is much wider and longer, and filled it with 5 ml of the pink media solution, and then spat it back out into the flask.

It’s pretty cool how you get the solution in and out of a pipette – you use this hand held device that looks a bit like a gun, called a “pipette filler” (picture below left) and one of the “triggers” causes liquid to fill up the pipette, and the other “trigger” causes the liquid to be released. You can, of course, push the triggers very slowly, and stop at any time, to control how much you take in or let out.

After that, I put the flasks back into the warming unit, and repeated the process for the bigger flask and the plate.

Then it was time to go refill the styrofoam container with fresh ice to keep Wednesday’s media fresh, and then go home.

At the end of it all, I was able to tell myself: “See, I know what I’m doing. I do belong here. And no one can tell me differently.”